He walked on water. 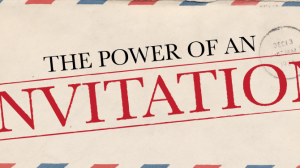 He was on the Mount of Transfiguration.

He was the first apostle to see Jesus after he was resurrected.

He preached the first sermon in the early church after Pentecost.

His name was Peter.

How did he come to Jesus? Check this out:

One of the two who heard John speak and followed Jesus was Andrew, Simon Peter’s brother. He first found his own brother Simon and said to him, “We have found the Messiah” (which means Christ). He brought him to Jesus. Jesus looked at him and said, “You are Simon the son of John. You shall be called Cephas” (which means Peter). (John 1:40-42 ESV)

Peter’s brother Andrew invited him. We hear little of Andrew. We know much of Peter.

Don’t underestimate the power of an invitation!

Who knows what God has planned for the person you’ll “bring to Jesus!”