But we had hoped that he was the one to redeem Israel. Yes, and besides all this, it is now the third day since these things happened. (Luke 24:21 ESV)

There are two kinds of hope and they are quickly discerned and easily defined. If I plan to work outside today I’ll say, “I hope it doesn’t rain.” That statement could easily be translated, “I wish it wouldn’t rain.” In this case hope is defined as wishful thinking. This kind of hope is part of our everyday existence. We live in the land of wishful thinking. 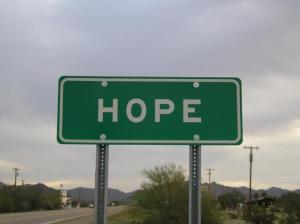 Cleopas and his friend banked on such hope. But we had hoped.They had their own hopes for Jesus, their own aspirations for his life. When he fell short of their dreams, they assumed he had fallen short of His purpose. Nothing could be further from the truth.

Not only that, but we rejoice in our sufferings, knowing that suffering produces endurance, and endurance produces character, and character produces hope, and hope does not put us to shame, because God’s love has been poured into our hearts through the Holy Spirit who has been given to us. (Romans 5:3-5 ESV)

Confident expectation in God’s character and God’s promises will never put us to shame. God comes through every time. When we mold God’s plan into our own design and He “comes up empty” we’re embarrassed. Our faith falters. We wonder what went wrong. Sometimes we even blame God. Somehow Cleopas and his friend missed this conversation Jesus had with his disciples:

They had no idea that everything they ever hoped for was walking on the Emmaus Road with them.